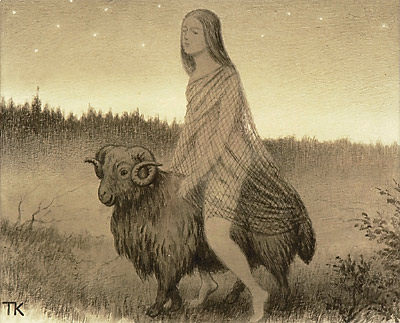 THE CONVERSION OF SHEEP

When St Filian first came upon the sheep
they stood with their Sumerian heads
and stared him out,
for it is a fact that though sheep are mentioned
many times in the bible,
it is always in a bad way.
Follow me said St Filian,
I have a new path and he pointed
into the hills, to where the sun was rising
setting the gorse to blaze.
They had seen many paths and sunrises,
you might say they were inured to them.
They had grass here, green enough,
and every second Thursday
a book group,
due to discuss that night the third of
Naguib Mahfouz’s Cairo Trilogy,
illustrating existentialism
in a non-Western context.
Nevertheless they saw
the fine pitch of madness
in the old man’s eyes
and, reminding themselves
they were essentially
compliant herd animals,
followed Published by The Delightful Mrs P

In Service to the Land and the Old Gods of Britain

Light in Extension: A Magical Journal

Bandit Fiction
Strange Goings On In The Shed

A Scrapbook of Myth, Magic and Memories

Practitioner of the sexual magic of BABALON, transdisciplinary artist & writer

All the Gothic, All the Romance, All the Time.

Singing For Her
Foxglove Journal

Magical musings in a strange world

Live to Write - Write to Live

We live to write and write to live ... professional writers talk about the craft and business of writing

haunting and horrific poetry and fiction since 2017